The girls’ basketball team is looking strong this winter, with high hopes to build on their performance from last year. Captains Jennifer Ryan (VI), Aly Feeley (VI), and Olivia Volpe (V) will be leading this year’s team as they approach the upcoming season with a new and improved mentality.

“It was kind of hard last season because we lost a lot of our best players,” Volpe recalled. “Because of that, we went into last season with low expectations and … we lost a lot of morale.” Working from the lessons they learned from last year, the girls’ basketball team has made it their mission to “work harder on [their] team chemistry.”

Feeley is confident in the team’s ability to achieve this goal. “We all have a strong work ethic and a desire to get better every day, which is critical to the success and improvement of a team.” She adds, “this team has a really special environment and culture that differentiates it from other sports teams on campus … I can’t wait to see how the season goes!”

After a spectacular showing in both the county and state tournaments last year, the senior-heavy boys’ basketball team is looking to make an even deeper run into this season’s tournaments. Coach Jason Murdock said, “Knowing that we have six returning seniors from last year’s team, experience is key and we always want to win our conference, advance in our county tournament, and show well in the state tournament.”  The team has been preparing offseason, Coach Murdock explains. “[The guys] have been in the gym working with Coach Scott, so they are very motivated.” It is clear that team culture is very crucial to the success of the program, Coach Murdock explains. Incoming freshmen should expect, “a team that cares about each other, a team that works hard and is competitive, and a team that’s going to do their best to represent Pingry.” The team officially kicks off the year with a difficult game at Immaculata on December 23rd.

This season, the Pingry ski team is looking to continue their positive momentum by improving upon last season’s success. Led by captains Matt Dispenza (VI), Natalie Ladino (VI), Peter McClearn (VI), and Rosemary Collins (V), the team hopes to build on last year’s performances while also fostering a strong rapport between each member of the team.

The ski team’s main priority this year is “to qualify for team states and get more individual skiers into the Race of Champions,” Collins said. To do this, the captains have implemented additional on-snow training sessions at the National Winter Activity Center. “This mountain has a steeper trail than we usually train on […] By training more on a steeper pitch, we will be better prepared to race,” Collins added.

Aside from individual improvement, the captains also hope to further the camaraderie on the team. Ladino notes, “One of our goals is to foster a stronger team environment so that we can encourage a more positive and supportive atmosphere for everyone.”

Overall, the Big Blue ski team is looking forward to a promising season.

The boys’ winter track team is returning with a strong lineup this year. Despite losing a handful of senior players, the team still has fifteen boys, including five new freshmen. With both new and returning runners, Head Coach Chris Shilts says, “We have some strong individual talent, and we hope to put these pieces together with some with lesser experience for some relay experimenting.”

The boys will be pushing through rigorous training in the winter weather. Henry Wood (V), a runner for the boys’ winter track team, said, “There are a lot of different elements that go into our training. The team lifts in the weight room four days a week. It is important for us to practice even if conditions are harsh so we don’t fall behind on our training.” After finishing fifth last year, the team hopes to crack into the top three in the NJSIAA Prep “A” Meet. The team is also hoping to place high in the Skyland Conference.

With a lot of strong runners, the boys’ winter track team is ready to perform to the best of their ability. They are excited to succeed and show that their training has paid off!

The girls’ winter track team, led by captains Dylan Anidjar (VI) and Kier Brown (VI), is looking to carry their great successes from last spring into the winter season. Last spring, two relay squads made it to nationals. This year, the team is looking to build on this achievement. Coach Christopher Shilts’s main goals this season are to “make a run at the Group A title and place high at Nationals in both relay and individual events.”

The team is made up of both experienced upperclassmen and newcomers to the sport. Anidjar believes that with the team’s “supportive and knowledgeable coaching staff” as well as its “hard work, [it] will definitely lead to a successful season.” With the season right around the corner, girls’ winter track is ready to achieve their goals and have a great season. 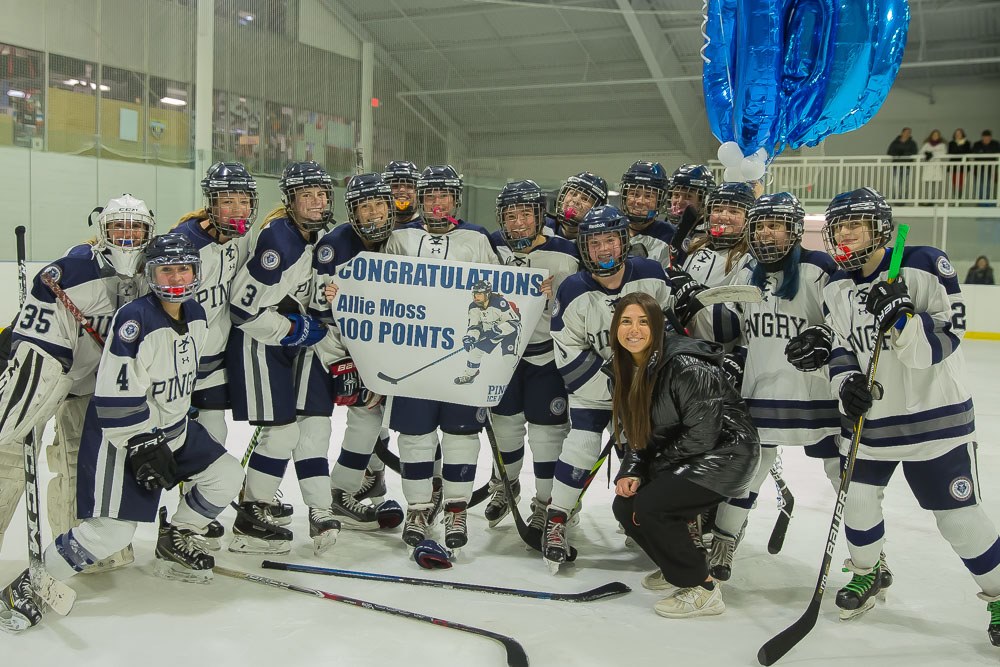 Coming off a great season last year, the boys’ ice hockey team is hoping for another strong season. Last year, the team finished 19-3-1 overall, and 13-1 in their conference. With returning scorers and play-makers, including Eric Bush (V) and Jared Kordonsky (V), the team is hungry for another conference victory.

Captains Ryan Bush (VI), Joe Faccone (VI), and James Cummings (VI), look to star incoming freshmen Henry Pyne (III), Nick Faccone (III), and Bennett Crosby (III). “We got a few new freshmen who look pretty good . . . I think the new guys will fit right in,” said Bush.  The team looks to avenge their one loss from last year against division rival Ridge and repeat their perfect 3-0 record against other conference rival Hillsborough. “We got a couple big games this season [against] Pope John and the Hun School,” Bush noted. Hoping for another great season, players and coaches are getting ready for their regular season opener against Pope John on December 3.

The girls’ fencing team anticipates a promising season this year. Led by captains Allision Lee (VI) and Jamie Wang (VI), the team is hoping to build upon its past success. Last year, the team ended their season with a 6-7 record and had success in many major tournaments. Despite being a small team, the team believes the small group allows for a closer bond between the fencers. Zala Bhan (III) noted that the preseason workouts can be difficult. “The workouts can be hard sometimes, but they have taught me resilience,” she said. The team has been working hard during preseason to ensure a strong performance at upcoming meets, especially at the District tournament, where their individual, squad, and team performances all count toward their standing in the State tournament. The first meet of the season is on December 20 against Montgomery High School. Go Big Blue fencing!

This year, boys fencing is ready for anything. Although the team is still in the middle of preseason, they are confident of success in the upcoming season. Several new fencers have arrived from the middle school, including Charles Jiang (III), Andy Overdeck (III), Vared Schmuler (III), and Max Watzkey (III).

Last year, the team fenced valiantly throughout the season, and this year’s captains, Corbey Ellison (VI) and Derek Huffman (VI), are excited to build on that success this year through strict preseason practices, which they believe will help to organize the team. Watzkey says, “My fellow fencers are extremely friendly, and I think we are ready for the season ahead.” With just a bit of practice, boys fencing is sure to come out on top this year!

Led by co-captains Emily Sanchez (VI), Martha Lewand (VI), Madeline Skapper (VI), and Coach Deirdre O’Mara, the girls’ swim team has started off strong with early morning and weight room practices. Coming off of a stunning season last year, the girls are working hard to prepare for the upcoming season. They will attend events like the Skyland Conference and Somerset County Championships, and, of course, the Prep “A” Championship at Lawrenceville. Last year, they were second in the Skyland Conference, the highest they’ve placed in recent years. The team also won the Prep A Championship for the third year in a row. Despite the loss of several seniors, including Darlene Fung ‘19, many freshmen have joined the team this year, constituting almost half of the team. Sanchez sees this year as “a new wave of the swim team.” Her goals for the team this year are to have fun, work on team spirit, and help the freshmen adapt to the community. With all the new blood, the girls’ swim team is aiming for a successful and fun season, as they hope to win the Prep “A” Championship for the fourth year in a row.