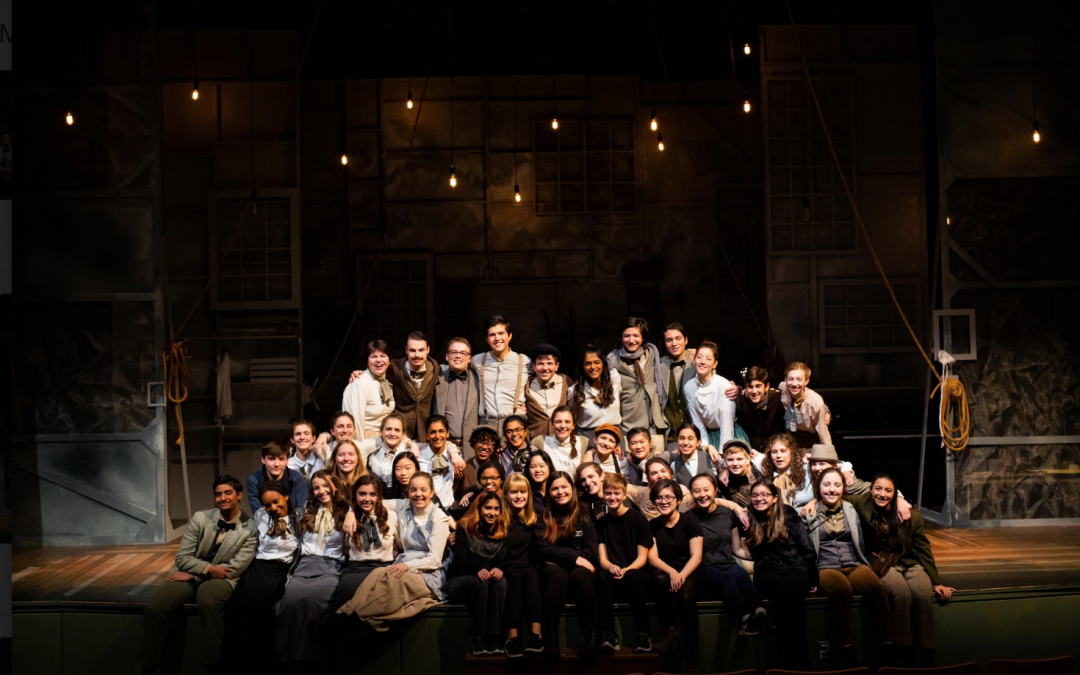 This year, the Pingry Drama Department performed the play Our Town for its annual fall production, holding performances on November 7th and 9th. Written by Thornton Wilder and directed by Mrs. Stephanie Romankow, the play follows the life of Emily Webb and George Gibbs. These two neighbors experience everything together: growing up, falling in love, and eventually dying. The play is set in a small town called Grover’s Corners in New Hampshire. It explores the seemingly mundane activities in life, and how the small details of the world are what make it worth living. A play within a play, this show is narrated by eight stage managers: Corbey Ellison (VI), Nina Srikanth (VI), Lily Arrom (V), Alex Kaplan (V), Adelaide Lance (V), Sydney Stovall (V), Natalie DeVito (IV), and Ram Doraswamy (VI). As these narrators open and close the show, they leave the audience with a warm feeling of nostalgia, as well as the realization that each moment is instrumental making one’s life unique and beautiful.

Act II is centered around George and Emily’s wedding. This includes a flashback of when both characters realized they were meant to be with one another; after a long talk over ice cream sodas in Mr. Morgan’s (Lily Arrom, V) drugstore, they admitted their feelings for one another and decided to get married soon after their high school graduation. The act ends with a captivating wedding celebration.

The play transitions into Act III, which takes the audience through Emily’s sudden death during childbirth. As she joins the world of the dead, she realizes just how much she loved being alive and spending time with family and friends. The audience joins her as she revisits her 12th birthday and reflects on how fast life truly goes by.

The performances were the culmination of two strenuous months of rehearsals and set building, and they showcased the efforts of over 50 students. Along with Mrs. Romankow and head stage manager Lindsay Cheng (VI), new faculty members Mr. Joseph Napolitano and Ms. Emma Barakat were heavily involved in the production. Ms. Baraket played the crucial role of head carpenter. Mr. Napolitano, who was the lead set designer, greatly enjoyed his first Pingry production. He described Our Town as “a true example of collaboration, and the perfect first project for [him] to work on at Pingry.” Reflecting on the past few months, he adds: “Working with the design & tech crew, Mr. Van Antwerp, and Mrs. Romankow was a joy. I believe all of our work blended together in a delightful way.”

Mr. Napolitano was not the only one to note the production crew’s strong sense of community. Adelaide Lance remarked that “[The show] was amazing! We’re truly all one big family.” For some, however, the fall play marked the beginning of the end. Stuart Clark, having completed his final fall play, reminisces about acting at Pingry: “It was all so special. The Drama Department has given me a lot over my four years at Pingry. I’m really grateful that I had the opportunity to act alongside people that mean a lot to me.”