Buttondowns Return to their Roots 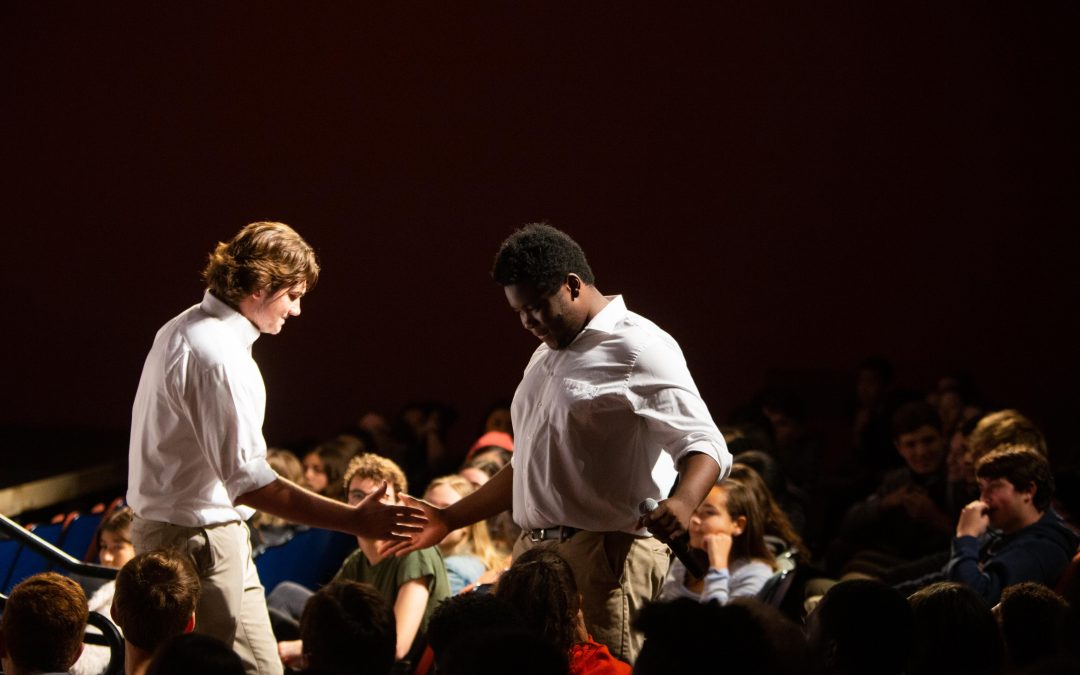 On November 22nd, the Buttondowns raced down from the top of Hauser Auditorium to begin their annual Buttondowns assembly. This year, the all-boys a capella group is headed by president James Wang (VI), vice-president Charlie Malone (VI), and secretary John Roberston (VI).

As is tradition, the assembly began with the highly anticipated Buttondowns movie. Directed by Wang, this year’s movie was largely influenced by the 2010-2011 movie. He described it as a movie that was “so low budget and horrible production-wise, but very funny.” Wang further elaborated on his plan for the movie. “I wanted to bring the Buttondowns movie back to what it was, just something more casual… a simple concept for every Buttondown.”

After the movie ended, the Buttondowns, dressed in their signature white buttondown shirts, khakis, and no shoes, ran down to the stage to begin their performance. The first song was Stephen Bishop’s “On And On,” with soloists Alex Kaplan (V) and Vared Shmuler (III). Wang defended its role as an opening number, saying that, “It’s the song that we’ve practiced the most. It’s one of our strongest songs but also one that not a lot of people know.” Furthermore, “On And On” incorporated choreography to the crowd’s delight. The Buttondowns constantly moved across the stage, forming lines and semicircles that kept the soloists at the center.

Directly following “On And On,” Nolan Baynes (V) and Justin Li (V) paired up as soloists for “Slide” by Calvin Harris, Frank Ocean, and Migos. Shmuler added to the performance by singing the high-pitched verses at the beginning of the song, receiving great appreciation from the audience. Once again, the group deviated from their traditional semicircle formation in favor of having the members sit down on the floor to give off a more candid and relaxed demeanor.

Ram Doraswamy (IV), John Robertson, and Alex Kaplan starred in the Guardians of the Galaxy medley, a combination of three songs from the Guardians of the Galaxy movies. Comprised of Blue Swede’s “Hooked on a Feeling,” The Five Stairsteps’ “O-o-h Child,” and Redbone’s “Come and Get Your Love,” the medley not only transitioned between the three songs throughout, but included physical transitions with the Buttondowns. Each song featured different configurations and actions, providing viewers with a clear sense of when the songs switched between each other.

The next song was “Slow Dancing In a Burning Room” by John Mayer and was sung by soloists Henry Wood (V), Ore Shote (V), and Charlie Malone with the Buttondowns in a straight line facing the audience.

Lastly, Baynes and Wang capped off an unforgettable performance with Post Malone and Swae Lee’s “Sunflower.” As his final solo and song in front of the entire high school, Wang remarked positively on his experience with “Sunflower.” “I loved [Spider-Man: Into the Spiderverse] so Sunflower was a great song to end on… I really enjoyed singing something that puts me in a different mood and takes me to different places.”

What was unique about this year’s assembly was the presence of choreography. Compared to previous years where the group stood in a static semicircle, the Buttondowns enthralled the crowd with their movement, adding another dimension to the performance. When asked about his overall experience in the Buttondowns, Wang said that, “It’s been interesting. Freshmen year was amazing but for the last two years, we got lost in the movie so much that we kind of forgot about the singing. After last year, I decided that we’re going to focus on the singing because it’s a Buttondowns assembly and that’s the core of the group.” Wang was thankful for Dr. Moore for his unwavering support and advice and also thanked the rest of the seniors, Malone, Robertson, Yu, Dispenza, and Bugliari. He was especially grateful for Malone who arranged all of the songs and did “so much work behind the scenes. He deserves as much credit as me and without him, I don’t think the concert would even be close to how it sounds right now.”

The assembly was hugely appreciated by the Upper School as evidenced by the thunderous applause and cheering throughout the entire event. James ended by saying, “I’ve tried to bring the Buttondowns back to their roots and I sincerely appreciate everybody that’s been there for me.”