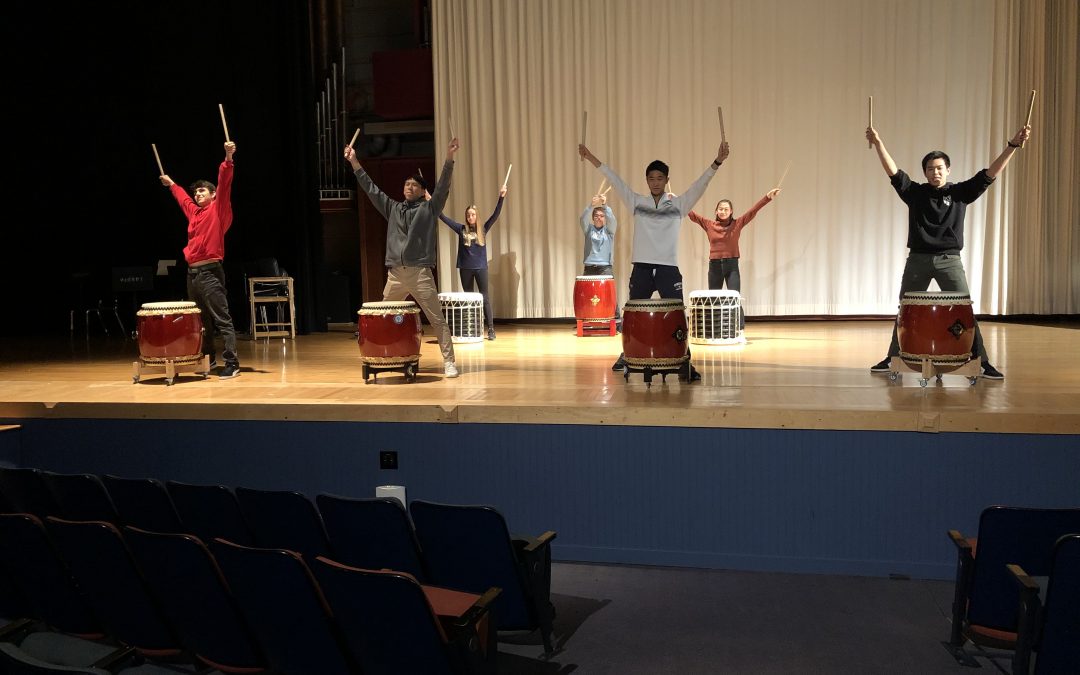 During morning meeting on September 23rd, Pingry’s Taiko Drumming Club performed “Dokokara,” a composition written by the principal of the LA Taiko Institute in the 2010s.

Three years ago, Pingry’s former headmaster suggested that Mr. Leone should host a workshop about taiko drumming. Twelve students and faculty attended. A few months later, Pingry’s newly established taiko group put on their first performance at the Taste of Pingry event, and Pingry Taiko Drumming became an official club. Since then, Taiko has performed at several school-wide events, including: A Taste of Pingry, the Lunar New Year Assembly, Night of Noise, and more.

Mr. Leone was interviewed after the morning meeting performance on September 23rd, and below are excerpts of that conversation.

How did you discover and how long have you been involved with Taiko?

“I have been playing for about ten years. I got introduced to Taiko through a global music class. I was a music minor so one of the requirements was to take some music electives. Because we had to do a field study, the professor told us about a Japanese Taiko drumming group in Philadelphia. I was blown away. About a week later, I saw them again and someone at TCNJ told me that they were thinking of starting a Taiko group. I never thought I’d hear from them again, but I did! At the first practice, I was terrible! Three sessions turned into five, which turned into eight, and we had our first performance. I wrote a piece for the group because the Asian American Association had a cultural show in the spring where we debuted. From there TCNJ Taiko was born and is still going today. They’re on their twelfth year there!”

How do you select a piece for the club to perform?

“I try and find things that are open source or pieces that are copyleft. Copyleft means that it’s open to use, but whatever you produce has to be released copyleft. This is a little tricky for us because there’s a lot of disclosure and consent. I also try and find pieces that are fun to play and watch! ‘Dokokara’ is a challenging piece, but some of our members need a good challenge. The piece should be accessible for any Taiko members that are relatively new.”

What is the process for preparing a Taiko performance?

“Learning the piece and getting everyone comfortable is important. I believe very strongly in making sure that everyone is confident with what they’re doing before they go on stage. I try to fit in as much practice time as possible and encourage students to practice on their own. Members have asked to rehearse outside of regular practice, which is easy since we can set up a drum in a practice room. We have to make sure that practices are low pressure. Some of the performances can feel high pressure, but only if you let it. Performing in front of the whole school is one of the bigger audiences I’ve performed for. The Pingry community is supportive and energetic, so I feel zero pressure.”