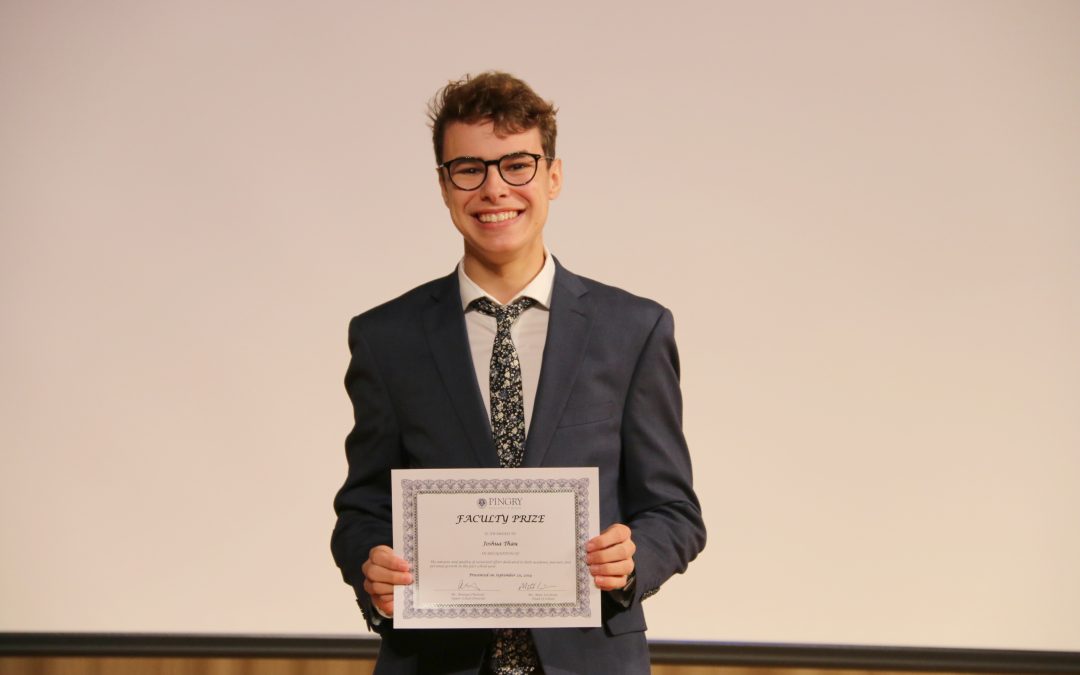 On Friday, September 20, the Upper School gathered in Hauser Auditorium to celebrate students who displayed exceptional academic effort and achievement in the 2018-2019 school year.

The ceremony began by recognizing the Form VI students who were honored by the National Merit Scholarship Program for their scores on last year’s PSAT/NMSQT exam. This year, twenty-two Pingry students were named National Merit Commended Students, while an additional three students were honored by the National Hispanic Recognition Program. Seniors Stuart Clark, Anjali Kapoor, Ashna Kumar, Brian Li, Ashley Lu, Collin Wen, and Robert Yu were recognized as National Merit Semifinalists and given the chance to advance and potentially become finalists in the spring.

Following these recognitions, Upper School Director Ms. Chatterji presented the Citizenship Prize, which is given to one student in each grade who best embodies the spirit of the Honor Code. Next, the Faculty Prize was awarded to students who showed commendable effort and commitment during the past academic year. Finally, Ms. Chatterji presented the Scholarship Prize to the student(s) in each grade with the highest academic GPA. Notably, seven current freshmen tied for first and received the Scholarship Prize for their Form II GPAs.

Next, seniors who excelled in math and science were given various awards from the respective departments. These awards included the Rensselaer Mathematics and Science Award, as well as the Form V Whitlock Prize for Math.

Following tradition, Mr. Levinson presented the college book awards. Each award is presented to the member of the senior class who best embodies the qualities and values of the particular college named. Brown, Columbia, Cornell, Dartmouth, Mount Holyoke, Penn, Princeton, Smith, Wellesley, Williams, and Yale were the colleges represented this year for a total of eleven awards.

On behalf of The Justin Society, Ms. Taylor of the English Department announced the winners of the annual writing competition. Writers submitted their entries last spring, which were then reviewed by the English Department. During the assembly, writers and poets from every grade received awards and honorable mentions for their works of creative writing, poetry, historical fiction, and more.

The assembly is a celebration of student achievement, effort, and dedication. It serves as a reminder of the effort that each Pingry student and faculty member puts into school every day. The Pingry community congratulates all of the students honored at the ceremony, and looks forward to another year of inspiring achievements and hard work.