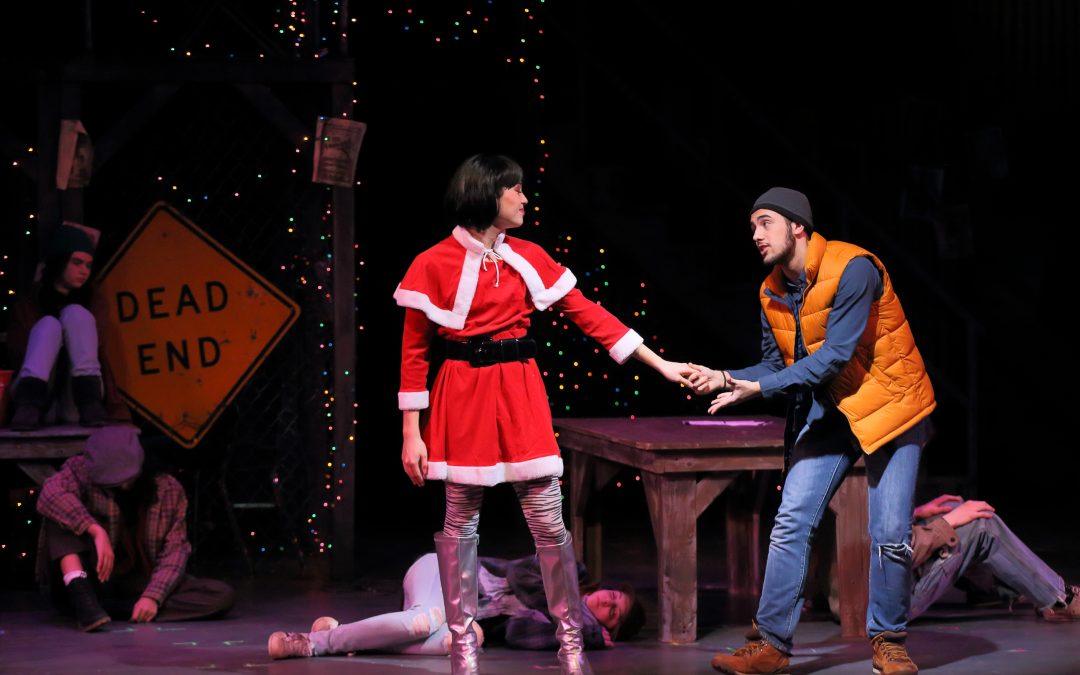 The musical focuses on two roommates on Christmas Eve: Mark (Nick Grimaldi ‘19), a struggling filmmaker and Roger (Ian Dugan ‘19), a previously successful but now troubled rock musician. One of their friends, Tom Collins (Lucas Vazquez ‘19), plans to meet the two at their apartment, but is attacked and beaten. Meanwhile, Mark and Roger’s former friend and current landlord, Benny (Rajeev Doraswamy ‘19), demands last year’s rent, but the two roommates refuse to pay. On the street, a cross-dresser called Angel (Leo Zhu ‘19) finds Collins and the two instantly fall in love, revealing to each other that they are HIV positive. Roger is also HIV positive, contracted from his previous girlfriend. He tries to write a song on his guitar, but fails, and is interrupted by Mimi (Katerina Deliargyris ‘19) knocking on the door. They instantly feel attracted to each other, but Roger pushes her away.

Out on St. Mark’s Place, Maureen (Dorothea Miller ‘19), a performance artist, begins her performance to protest Benny’s eviction of the homeless. Afterwards, all the protesters meet at the Life Café, but they see Benny there. He announces that “Bohemia is dead,” but the protesters celebrate “La Vie Boheme.” Beepers go off to remind them to take their HIV medicine. As a result, Mimi and Roger discover that the other is HIV positive and decide to begin a relationship.

The next summer, Angel dies. After his funeral, Mimi reveals that Roger has sold his guitar and bought a car to leave New York. Roger responds by saying Mimi is back with Benny, her previous boyfriend. Roger leaves for Santa Fe, and after a while, returns to visit his old friends with the intention of showing them the song he wrote in Santa Fe. Suddenly, Maureen and Joanne (Alessia Zanobini ‘19) carry Mimi into the apartment, who collapsed out on the streets. Roger pleads for her to live and sings Mimi the song he took a year to write. After appearing to die, she abruptly wakes up to everybody’s shock. The family has come back together and agree that there is “no day but today.”

Director Mr. Alan Van Antwerp brought his dramatic expertise to the winter musical. With a background in managing and performing in professional and community productions, Mr. Van Antwerp was able to unlock the full potential of all the cast members. Although Rent was his first time serving as the director of a Pingry production, Mr. Van Antwerp created a passionate and supportive environment for everybody. In order to allow the audience to see the magic within the performance, Mr. Van Antwerp taught the cast and crew about the importance of collaboration. Deliargyris elaborated, saying, “Having Van as the director, he’s amazing, and I feel extremely lucky that I’ve gotten the chance to work with him.” Combined with a group of phenomenal performers and students, the musical was breathtaking and captivating.

Deliargyris, who played Mimi, said that Rent was much more serious than the previous two musicals. “Trying to portray that message has been something I’m very grateful for and I think it’s very important that we show the message to the school.” When asked what she will miss most about the Drama Department at Pingry, Deliargyris said, “I’m going to miss the community aspect of drama here and the teachers, as they always push you to be your best. I just love how everybody always loves coming to see the shows.”