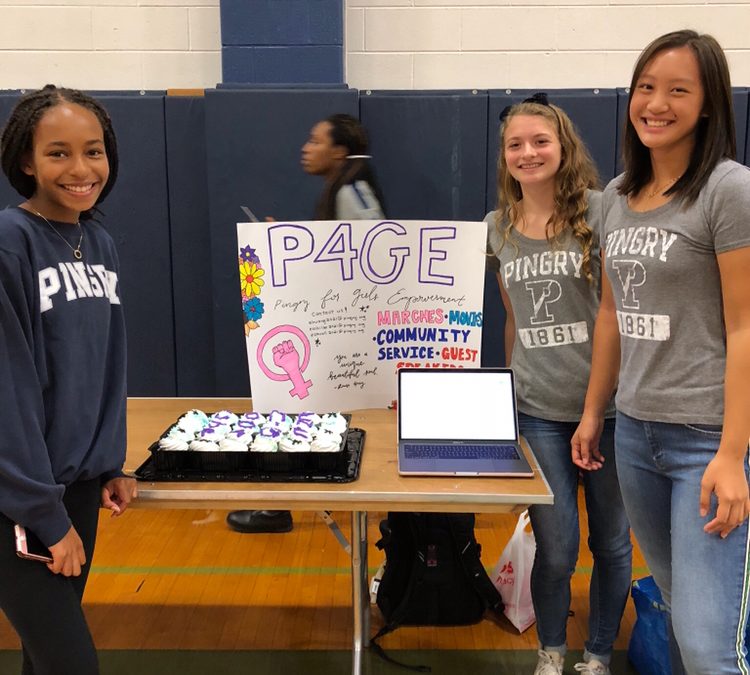 Pingry for Girls Empowerment (P4GE) is a new club in Pingry this year, looking “to raise awareness on contemporary issues affecting women and girls both nationwide and around the world,” according to club co-leader Eva Schiller (IV). The other co-leaders, Emma Huang (IV) and Sydney Stovall (IV), join Schiller to broaden the scope of girls’ empowerment both within and outside the Pingry community.

One of the main priorities P4GE leaders had when creating this club was differentiating it from Girls’ Affinity group, a group with similar interests. “The Girls’ Affinity group is definitely an extremely important asset to the school, so we wanted to make sure [our missions] weren’t clashing,” Stovall explains. “An Affinity Group is designed to bring people together that share the same identity to discuss topics that relate their shared identity. P4GE strives to be open to all genders because we believe women’s equality should not solely be an issue to women.” P4GE hopes to attract any student who shares the same goals as the club by hosting fun activities at each meeting.

The success and popularity of P4GE can be attributed to the creative ideas and opportunities the leaders have. When asked about her reaction to the response of the club, Schiller adds, “The leaders and I were very excited at the response of our club. Right now a large part of our club consists of sophomores, but we got a lot of attention at the club fair, and can hopefully expand further as we plan more activities.”

These activities include “female guest speakers from varying backgrounds to talk about female empowerment on a small panel,” according to Stovall, as well as “[taking] action by writing letters to government representatives” according to Schiller. With these plans in mind, the leaders hope to spark an interest for others to take initiative as well.

One of the first outside–of–school events the leaders planned was a trip to the Women’s March in New York City, NY. However, due to forecasts suggesting unfavorable weather, the trip had to be cancelled. Fortunately, the Women’s March did not go unattended as Grace Wang (IV) travelled to the city to attend the march. “I was disappointed when the trip got cancelled because I was really looking forward to it,” says Wang. “I decided to go anyway. It was such a nice atmosphere, and I had a great time!”

This year, P4GE hopes to encourage more students to participate in their club and to build on the environment at Pingry as a whole. The leaders are excited to see what the future brings for P4GE, and they aspir