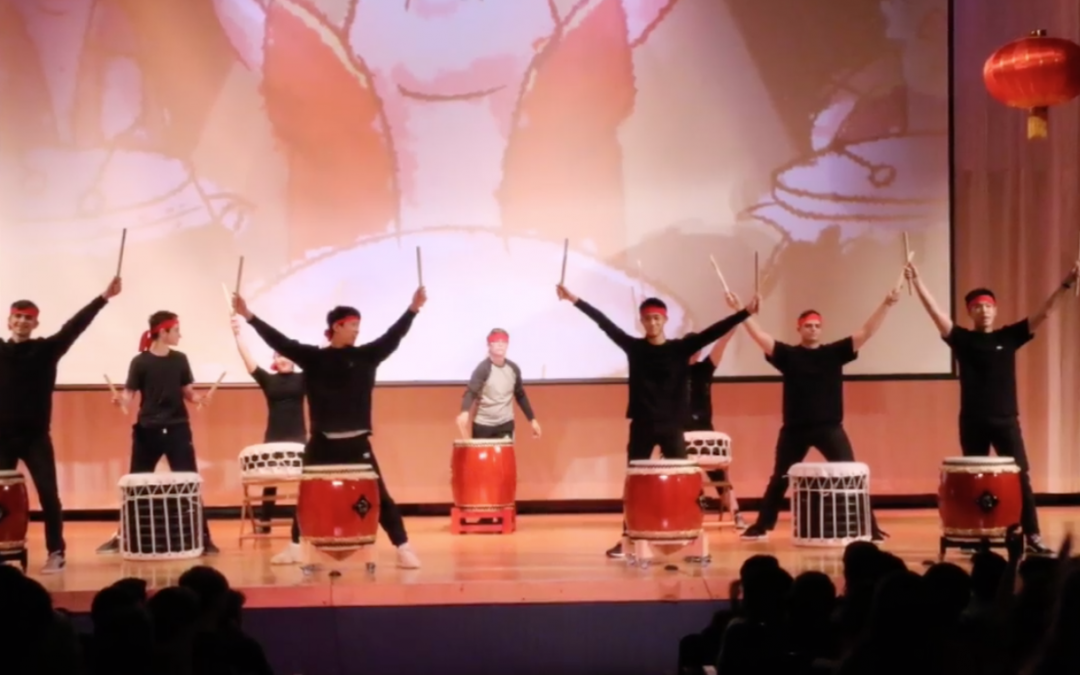 On February 8th, the highly anticipated Lunar New Year Assembly opened with a bright, lively rendition of the traditional dragon dance. This was performed by students from the Form II Chinese class with taiko drumming by Mr. Christopher Leone in the background. During this standard component of festive Chinese celebrations, students maneuvered a long dragon figure using poles positioned throughout the body to simulate the “river spirit,” which the dragon represents. Dragons also symbolize Chinese culture and are thought to bring good luck for the new year.

The 2019 Lunar New Year began on February 5th and ended on the 19th. As per the zodiac calendar, 2019 is the Year of the Pig – the 12th animal in the 12-year cycle of Chinese zodiac signs. In China, pigs generally symbolize wealth. Those born in the Year of the Pig are thought to be blessed with good fortune, happiness, and success later in life.

First, and a definite highlight from this year’s assembly, were 12 exchange students from Quzhou No. 2 High School, Pingry’s sister school in southeastern China. The students, who visited Pingry for 2 weeks and were hosted by the families of various Upper School students, first introduced themselves to the school and then proceeded to sing songs they had prepared that reflected the spirit of their city and school.

Next, the brother-and-sister dynamic duo, Elbert Ho (Grade 6) on piano and Felicia Ho (VI) on violin, performed a duet of the traditional Chinese folk song “The Joy of Spring” to welcome in the spring, all while dressed in traditional Chinese clothing. Belinda Poh (III), Francesca Rainuzzo (IV), Udochi Emeghara (VI), and Annaya Baynes (VI), members of the K-Pop Dance club, followed with another energetic, more modern performance of  “DDU-DU DDU-DU” by the K-Pop girl group Black Pink.

The Taiko Drumming Club introduced a new performance piece, “Dokokara,” during the assembly, featuring solos by Noah Bergam (IV), Julian Lee (IV), Justin Li (IV), and Guan Liang (IV). This year’s piece was “one of the hardest yet, especially in terms of technique” said Lee, “with many complicated elements that involved interaction between us four soloists – we had to pass the beat back and forth.” Next was The Purple Swans Dance Troupe, a group focused on displaying the beauty, ideas, and significance behind Chinese culture through peking opera, which combines opera with dancing, acting, and acrobatics. Many members of the Pingry community belong to this group, and some took part in their dance performance during the assembly, titled, “The Song of the Pear Blossom.”

New additions to the 2019 assembly included Natalie DeVito (III)’s recital of the poem “Facing the Sea by the Warmth of Spring” by the famous poet Hai Zi entirely in Chinese. The closing element, an exclusive interview with Pingry Sage Dining Executive Chef Mr. Won Ho, a Chinese immigrant, and James Wang (V) was also a highlight. Overall, the many diverse performances of this year’s Lunar New Year Assembly emphasized the beauty of Chinese culture and its core virtues, something to remember and look back on for the year to come.