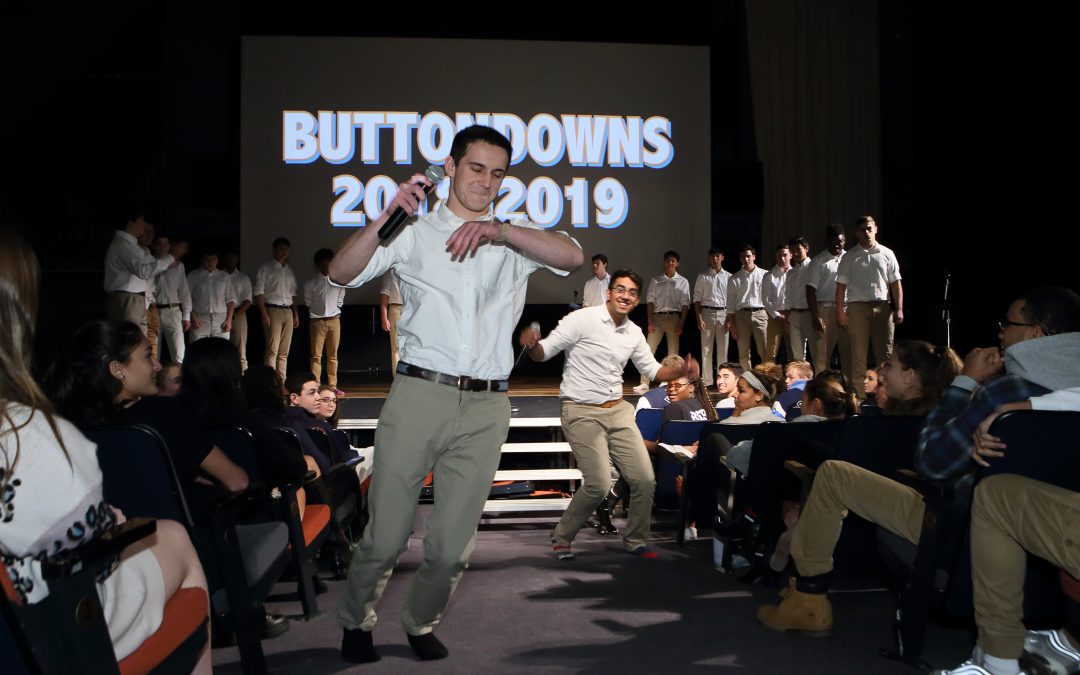 On November 20th, the final day before the start of Thanksgiving break, the Buttondowns serenaded the Upper School in Hauser Auditorium at their annual Buttondowns Assembly. The elite boys’ acapella group is led this year by president Rajeev Doraswamy (VI) and vice president Ian Dugan (VI).

The assembly began with the highly anticipated Buttondowns movie, an annual tradition. The three-movie format was inspired by “Edgar Wright’s unofficial ‘Cornetto Trilogy,’ a film trilogy with the same actors, themes, and creative team,” according to Dugan.

The seniors in the Buttondowns had been planning the movie for a long time, as evidenced by clips of the seniors throughout the years. To this, Dugan elaborated, “The introduction to the film was written back when we filmed in the BAC construction site as freshmen, and we left it open ended as to be able to take whatever creative direction we wanted.”

At the end of the movie, the Buttondowns ran down the flight of stairs to the stage wearing their namesake white button down shirts, khakis, and of course, no shoes. The first song was Bruno Mars’ “Marry You” with soloists John Robertson (V), Ore Shote (IV), and Alex Kaplan (IV). “I always learn something from performing in front of crowds. In this case, I learned how to lend attention to the people behind me while still singing correctly,” Kaplan reflected.

The next song had a more R&B feel: “Juke Jam” by Chance the Rapper, with soloists James Wang (V) and Nolan Baynes (IV). This is the second year the two have paired up for a song at the annual assembly. Baynes said he enjoys performing with Wang because, “I think that chemistry between us shows when we sing together, which is really unique.”

Nabeel Jan (VI) and Dugan sang next with the 1980’s hit “Jessie’s Girl” by Rick Springfield. Jan mentioned that he really enjoyed performing this particular song as both he and Charlie Malone (V) arranged the music together.

Finally, Rajeev Doraswamy (VI) and Henry Wood (IV) sang the closing song, George Erza’s “Budapest.” Wood appreciated how the song’s lyrics, “generally talk about how love is more important than anything else.”

Doraswamy spoke after the assembly about his years in the Buttondowns group, reflecting that, “It hadn’t hit me that it was my last assembly until it was over; once it did end, I felt a huge sense of gratitude to those who put countless hours in, and definitely some sadness that it was my last one.” He thanked Dr. Andrew Moore, “who was there for me all four years and has never wavered in his support for the group.” Doraswamy also thanked his fellow seniors Dugan, Jan, Thomas Campbell, and Ryan Henriques, as well as the entire class of 2019, “who have cheered us on from freshman year until now.” He also thanked Dugan for the immense effort he put into the Buttondowns movie.

The event was widely enjoyed by the whole Upper School, apparent by the loud applause. As a final note, Doraswamy said, “All in all, I’m really proud of the boys, and I’ll definitely be looking back on it with a real sense of both happiness and sadness.”