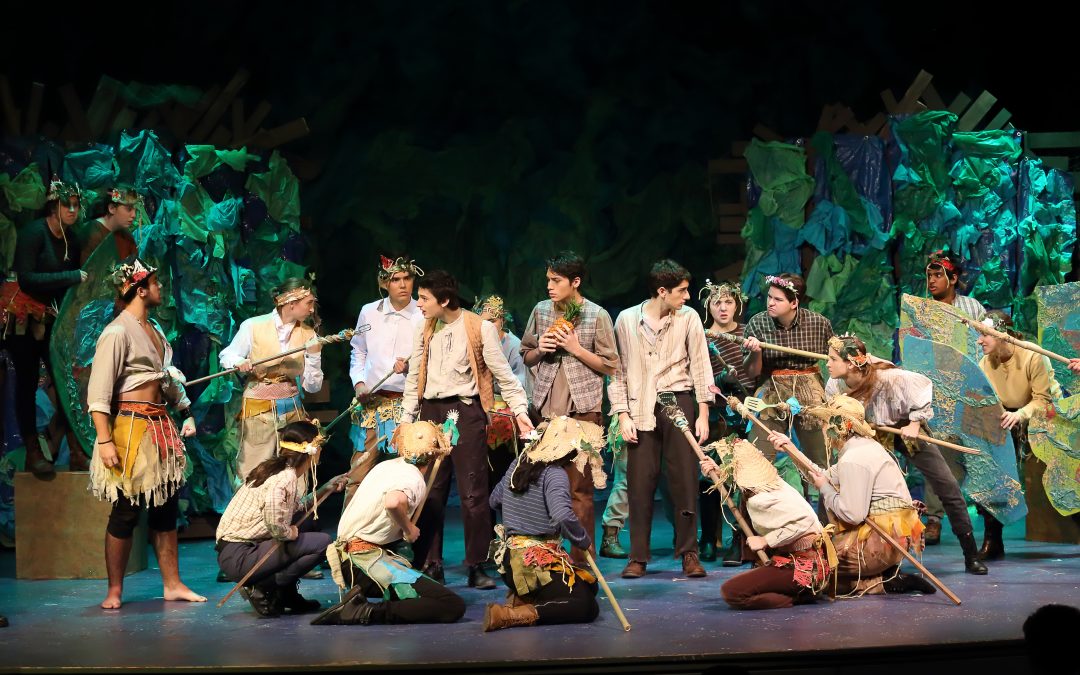 On November 8, 9, and 10, the Upper School Drama Department presented its annual fall play; this year’s play was Peter and the Starcatcher by Rick Elice. Based on the novel by Dave Barry and Ridley Pearson, this comedy explores the backstory of Peter Pan. Directed by Mrs. Stephanie Romankow, Peter and the Starcatcher included over 40 cast members, two British ships, and a forested island full of native people.

The play begins with Molly (Katerina Deliargyris, VI) and three orphans boarding the Neverland, a British ship commanded by Bill Slank (Lucas Vazquez, VI). Her father, Lord Leonard Aster (Stuart Clark, V), boards a second ship, the Wasp. Each ship has its own trunk, one filled with sand, the other with starstuff, a magical substance that makes people what they wish to be. While Molly befriends the orphans, Black Stache (Jack Lyons, VI) and his band of pirates take over the Wasp in search of the starstuff. They leave thinking they have successfully stolen the starstuff, but when they find their trunk is filled with sand, they realize the trunks had been swapped. The Wasp pursues the Neverland, while Peter (Nicholas Grimaldi, VI) and the other orphans take the starstuff and float to an island as the Neverland breaks apart. Molly finds them, but they are captured by the natives and their king, Fighting Prawn (Lucas Vazquez, VI). The orphans manage to escape with the trunk of starstuff, but Peter falls into a starstuff-filled lake. The pirates capture Molly and the two orphans, but Peter returns and interrupts the standoff. Stache opens the orphans’ trunk only to find it empty. Realizing his plan has failed, Stache gives a farewell, noting that he and his enemy Peter will meet again. Although Molly wants to take the orphans back to England, her father realizes that Peter was affected by the starstuff and cannot go back. Peter is then permanently a boy, the one thing he always wanted to be.

Although Mrs. Romankow has directed productions before, this was her first time directing the play. As a “magical” production, Mrs. Romankow said, “it embraces theater in its purest form, allowing the audience to see how the magic is made.” She appreciates that the actors are “not only a group of insanely talented students, but also students who know the importance of collaboration.”

This year’s fall play was drastically different from that of previous years, according to Lucas Vazquez (VI). “Last year, Antigone was an ancient Greek play with barely any movement or set changes. The cast this year was much bigger than last year’s, and we also had the songs [and] audio cues. [With] all the set changes, costume changes, and cues, it felt like we were doing a musical, or half a musical.”

The cast, along with Mrs. Romankow, agreed that the fall play was a rewarding experience. In the words of Leo Zhu (VI), “This play embodied the idea that everyone matters…I really enjoyed working with the cast and I wish I could stay at Pingry longer. It’s sad having to leave everybody behind after spending so much time with them.”