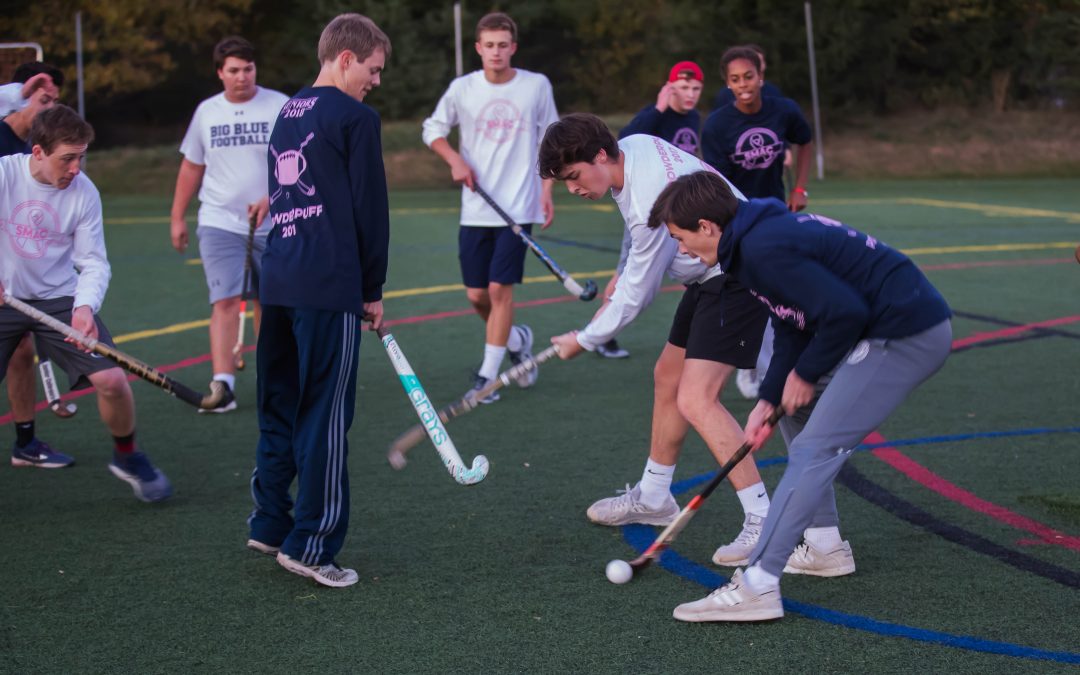 On October 27, juniors and seniors gathered on the turf for the annual Powderpuff Games. The event was organized by S.M.A.C., the “Student Movement Against Cancer” club, and students competed in two different events. First, the junior boys played a game of field hockey against the senior boys. Girls from both grades volunteered to referee and coach the game. In the field hockey game, the seniors were victorious with a 6-1 win over the juniors with the help of goals from players like Colin McKinnon (VI) and Austin Parsons (VI).

After the field hockey game concluded, the junior and senior girls took to the field for a game of two-hand touch football. The boys, many of whom are on Pingry’s football team, offered to coach and referee the girls in their battle against the opposing grade. Like the boys, the senior girls were victorious over the juniors in their game. Powderpuff was a great way to let seniors de-stress right before the early admissions deadline for college.

However, this fun event meant so much more than just a way for students to blow off some steam and engage in friendly competition. Taking place during Breast Cancer Awareness Month, the event helped raise money for and awareness about breast cancer. Mary Nussbaumer (VI), leader of S.M.A.C., said, “While collecting money was very stressful, it was worth it because over 1,000 dollars were raised.” For fundraising, Nussbaumer organized a Google Form for juniors and seniors to sign up for the games and order t-shirts. Each shirt was $20 and featured a special design for this year’s games. Nussbaumer worked with Director of Community Service Ms. Shelley Hartz weeks ahead of the games to set a date and figure out logistics. Altogether, 76 seniors and 77 juniors ordered shirts and participated in the Powderpuff events.

Jessie Carvelli (VI) said that her favorite part of Powderpuff was “the school spirit and infectious good energy.” To further help organize the games, Nussbaumer teamed up with the Big Blue Pride Committee to order pizza and decorations for the event. Nussbaumer said that her favorite parts of Powderpuff were “hanging out with her friends, listening to music, and watching everyone try out a new sport.” She added that, “it was really fun to see how into it everyone got, especially as a field hockey player myself.” Jason Weiss (VI) said that the best part about Powderpuff was “knowing that we raised a lot of money for charity.” This event would not have been possible without the help of Coach Decatur and Coach Drabich, who chaperoned the event; Bruce Morrison, who took pictures; Ms. Erin Rose and Mr. Stephen Spezio, who were there to help in case anyone got hurt; Ms. Hartz, who coordinated the event with Nussbaumer; and the Big Blue Pride Committee, who provided refreshments and decorations for the event.