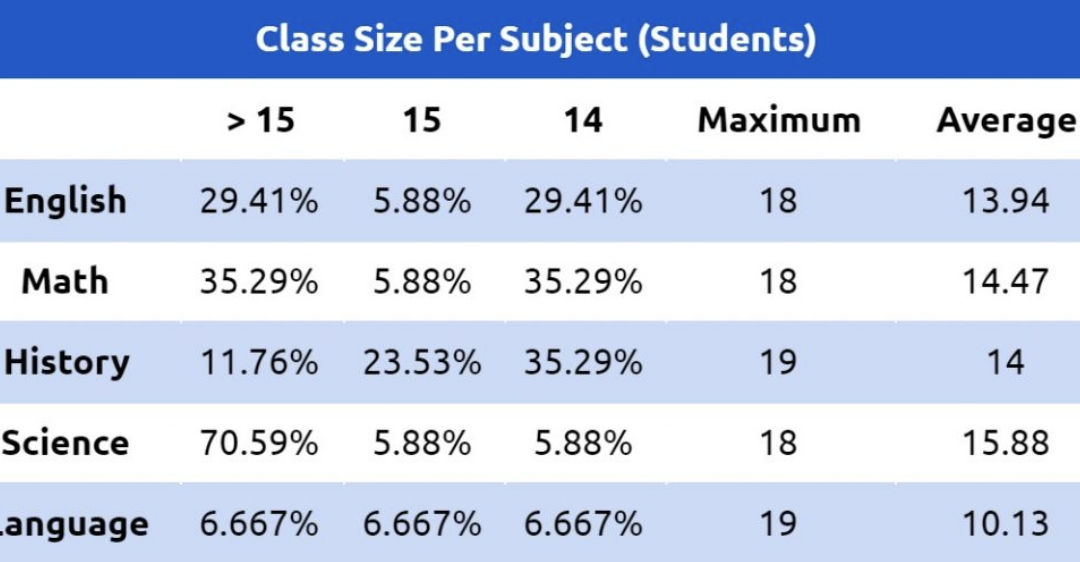 A math problem? Of sorts, yes. Except it extends beyond the scope of a simple one-period, ten-problem math test—it is something we deal with at Pingry daily.

Class sizes are one of the most important parts of an educational experience, but we talk about it the least. In fact, I have never heard anybody talk about class size during my two-and-a-half years at Pingry.

Of course, this is mostly justified. Pingry’s class sizes are significantly smaller than those in other schools, both public and private. Our student to faculty ratio is half of what it is in surrounding public schools and one third of the national average.

Smaller class sizes have long been linked to better academic performance and learning capabilities. For the same reason a private tutor is more helpful than a large group lesson, smaller class sizes allow for more individual attention. Pingry bills its class sizes as small enough to foster this connection between the faculty and other students, but not too small as to discourage collaboration and teamwork. Our school prides itself on these class size caps, which are featured prominently in multiple places on pingry.org. They are all centered around the same line: “keeping class sizes to 16 at the Lower School, 14 in the Middle School, and 13 in the Upper School.”

Earlier this year, I noticed that my science class seemed unusually large. This made me realize that not every class is as small as Pingry’s website claims. My science class, for example, has 16 students, which isn’t massive, but the lab always feels full. With more students, it is more difficult to provide attention to each individual student, regardless of how good a teacher is. When 65 minutes have to be divided up among more students than normal, the time per student ostensibly decreases.

I wanted to make sure I wasn’t the only one noticing that class sizes are inching further  away from that magic number 13. So, I created a survey that asked for the class size (including the teacher) of English, math, history, science, and language classes. I sent out the survey to various juniors and the entire Record staff. Out of the 17 people I polled, two reported not taking any language classes, so I ignored those two values when analyzing the data.

Based on this data, though, class size doesn’t really seem to be much of a problem. The averages are slightly higher than 13, with the exception of science classes, which are fairly higher. On the other hand, language classes seem particularly small.

This data doesn’t reveal the whole story though. The range of class sizes for each of these categories varies significantly: 10 for English, 12 for math, 9 for history, 5 for science, and 14 for languages.

This inconsistency led me to analyze each of the individual values themselves, shown in the table, which shows the percent of the sample with the class size of each category.

Clearly, a pattern has emerged. Language classes are mostly reasonably sized, besides one large class. History is the next best, with once again one very large class. English classes are in the middle of the pack, but the class size keeps increasing. Math classes are a little bit higher, but one class has a surprisingly large 20 students. Science classes exhibit the largest class sizes.

It’s understandable that not every class can be exactly 13 students, but to have almost three-quarters of science classes have more than 15 students is quite a stretch. In fact, not a single one of the science classes is less than 13 students; Pingry’s Science Department prides itself on its thorough explanation of concepts, but this disproportionate class size distribution hampers that proposition.

Now, I am in no way criticizing the faculty, staff, or administration. My point isn’t to criticize everyone except the students, but rather to note a trend that hurts our collective education.

Another important thing to note is that this is in no way a perfectly scientific survey. It is entirely possible that multiple students in this survey shared classes, which would skew the results. Misreporting could also have been a factor. My study also ignored electives and double subjects in science or math, for example. I definitely believe that further investigation should be done in order to ensure that class sizes are what they are supposed to be.

In this survey, I also asked for an ideal class size. The minimum was seven, and the maximum was 15 students. The average was 10.82 students per class. Obviously, classrooms and teachers don’t appear out of thin air, but some future thought needs to be given to what class size the average student might find beneficial.

Overall, there isn’t really much to panic about—just some intriguing numbers that show class sizes, especially in science, aren’t as low as they should be and that maybe the number 13 itself needs to be rethought a little bit. Perhaps 13 isn’t as magical as we believe.