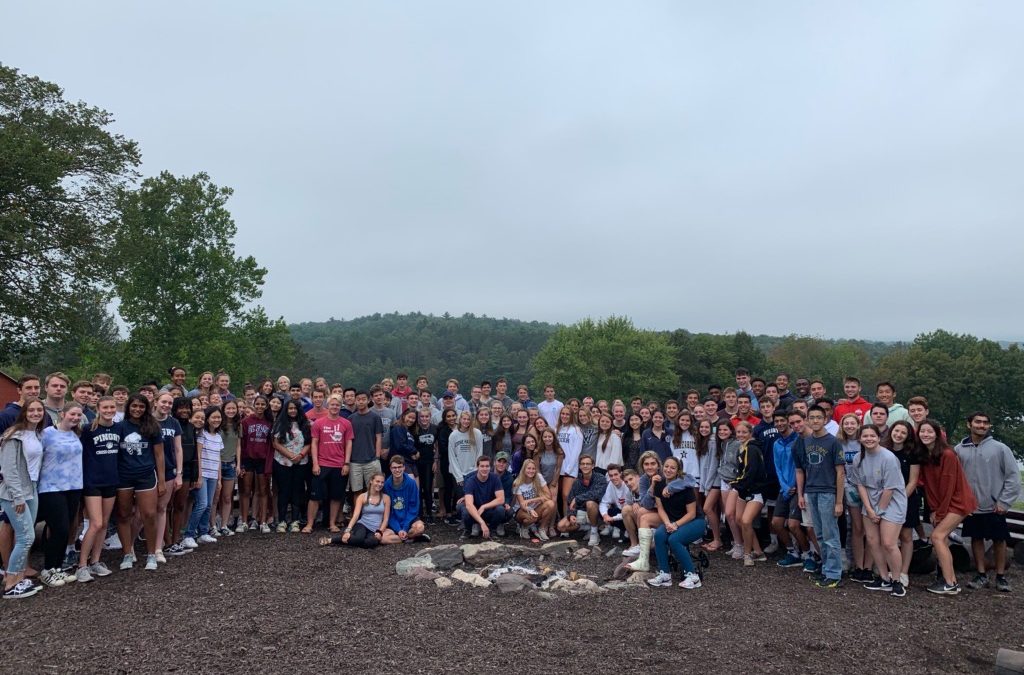 A week before school began, on September 3rd and 4th, Form VI students traveled to the Pocono Valley Resort in Reeders, Pennsylvania, for their senior retreat.

The seniors spent the trip participating in several activities, including a Western-themed dance, and working on their college applications. The goal of the trip was for the seniors to enjoy themselves while making progress on their applications.

Once the seniors arrived to the campsite via bus, they went to their assigned cabins to unpack. Shortly after, the activities commenced. Students went to relax by one of the two pools or to play sports, ranging from basketball to mini-golf. Students also had the choice to participate in watersports on the lake, climb a rock climbing wall, partake in a ropes course, ride a zipline, and more.

“I went on the ropes course, rode the zipline, and competed with my friends in the ‘human hamster balls’,” said Jessica Hutt (VI). “I really enjoyed these activities, and had a great time experiencing the outdoors with my classmates before heading into our final year together.”

After lunch and activities, the seniors began to prepare for the dance. The theme for the dance was “western.” Students dressed up as cowboys and cowgirls, with a majority of the costumes including flannels, cowboy boots and hats, and bandanas.

“The dance was a fun way to jumpstart senior year,” Nicole Gilbert (VI) said. “It was a great opportunity to reconnect with my friends and strengthen relationships with other people. Dressing up also added to the fun.”

After the dance, seniors enjoyed pizza and a campfire with s’mores. They also had time to socialize with friends in their cabins before the night ended.

“I felt that being able to spend the night with my friends was great, in that it helped me forget about all the college apps and let me focus on just hanging out and talking to my friends,” Thomas Wolf (VI) said. “I appreciated that, even though I didn’t request some of the people in my cabin, they were great company and I enjoyed the night.”

The next morning, the academic work began. After breakfast, the senior class was divided into two groups to partake in “breakout sessions” or workshops. Ms. Finegan and Ms. Reynolds each ran one of the two workshops. They used a descriptive writing exercise to help students with their personal statement essay. In the second workshop, Mr. Lear, Mr. Garrow and Ms. Cooperman split the group into smaller sections to converse about the application process and colleges that are typically undervalued by Pingry students.

Josh Thau (VI) found the workshops helpful, as the sessions increased his confidence in the college process. He said, “Before I went in, I was nervous about everything because I didn’t really know what I was doing,” he said. “But after I talked to both my college counselor and others about my issues pertaining to the process, I felt a lot more comfortable.”

After working on their applications, seniors had lunch, packed their bags, and made their way back to Pingry on buses.

Hannah Guglin (VI) thought the trip was an overall success. “I honestly felt like it was a really good way to start the year, spend some time and have some fun with people that I care about in our last year together,” she said.