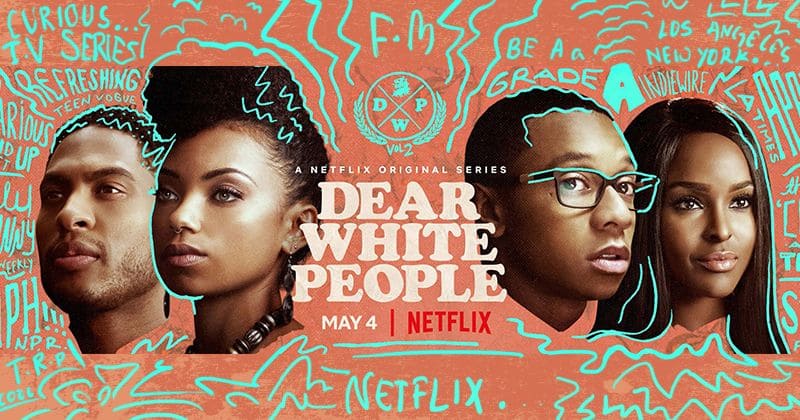 Netflix boasts many originals and blockbusters. In the case of shows like Black Mirror and Narcos, viewers are given a taste of what they are about to watch, obviously, from the show or movie title. However, the show Dear White People is interestingly one of the few misnomers on the network. Dear White People is based on a 2014 film of the same name, both written by Justin Simien. Season two of the show was released on May 4. With the buzz that the show got due to its misleading title and its satirical plotline, I knew I had to recap season one.

Dear White People focuses on the main character Sam, a black college student who runs a radio hotline called “Dear White People” at a predominantly white and extremely competitive fictional college called Winchester. The creation and name of her radio station receives a lot of backlash from the white students of the college. However, Simien uses Sam to address the show’s misnomer by explaining that although the radio station (and show) is addressed to white people, it is mainly focused on black people and doesn’t hesitate to criticize the black community.

Further, Simien makes each episode of Dear White People based around a different black member of the college. First there’s Sam, the headstrong activist on campus, who feels guilty about dating a white person. Then there is Lionel, an avid writer for the school newspaper who struggles to embrace his identity. There’s also Coco who comes from South Side, Chicago, but feels entitled when she is around the black community. This wide range of characters makes up the small percentage of blacks at the college. They allow Sam to use her platform to fight for and, at times, criticize her own people.

In the original movie, the main issue that Sam was broadcasting against was a “black face” party hosted by one of the notorious frats called “Pastiche.” While the party was shut down by the cops, Sam was taken aback by the fact that some members of the black community actually dressed up to attend the event. Season one of Dear White People tackles the unrest at Winchester; the non-colored students feel as though there is a “war” being waged by the colored people. For this reason, one of the donors offers to shut down a historically black house at the college and replace it with a mixed house. When students find out about it, the reaction is just as fiery as the one against blackface.

Season two leaves viewers wondering whether or not the black community will be forever rocked by the potential loss of a meaningful sanctuary for them. They have to face the fact that despite their differences and internal issues, they must band together in order to survive.

Dear White People is a show that will keep you laughing and doesn’t demand too much of your attention. The episodes are short and there are only ten in season one and eight in season two. I found myself laughing at the satire that all students, regardless of background, can somehow relate to.

The one criticism I’ve heard about the show, and I slightly agree with, is that the generalizations for the satire were overworked. The “types” of social groups at the college (based on race) seemed too cliché for some viewers. However, I think the show does a great job of explaining an aspect of college that many tend to overlook, while serving up some humor at the same time.