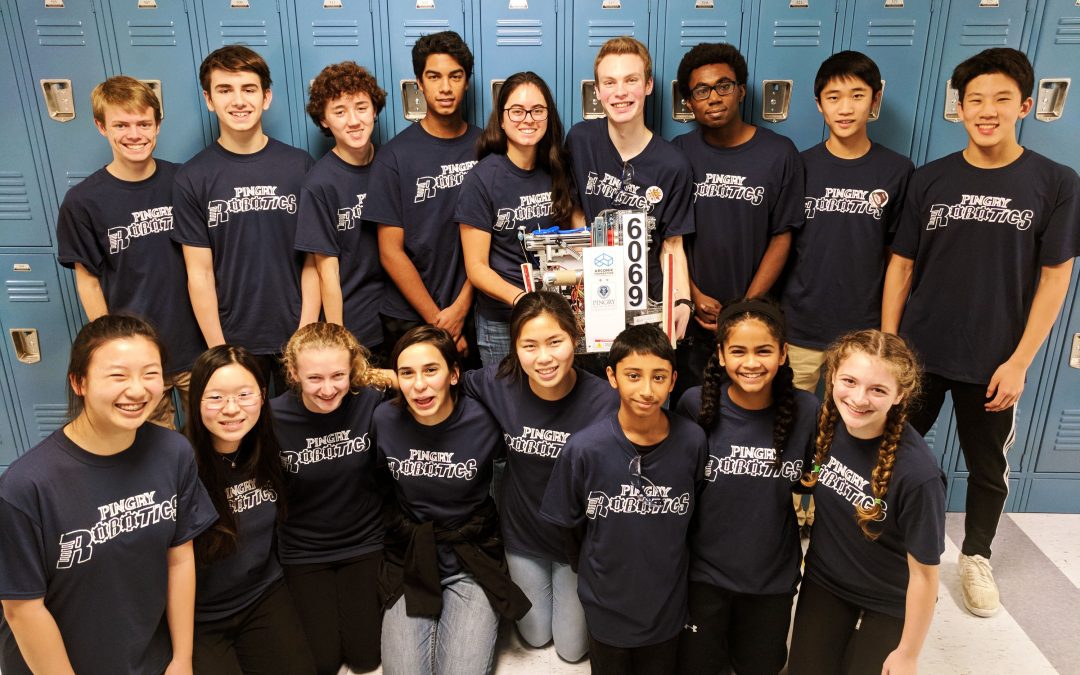 Tucked at the very east end of the school, beyond the cafeteria, below the crossroads of the foreign language wing and arts wing, lies one of Pingry’s best kept secrets—the mysterious, metallic robotics room.

In this legendary room full of power tools, wires, machines, nuts, bolts, computers, and old robots, Pingry’s robotics team has been preparing for its winter season of competition, the First Tech Challenge. Meeting during CPs, athletics, and sometimes after athletics, the team of over 30 students has been creating a notably effective robot in the hopes of qualifying for the New Jersey State Championships, and perhaps even the World Championships later on.

First, some background on how FTC competitions work.

There is a different game played each year. Each game is played by two alliances of two robots. In a game, there is both an autonomous portion, in which robots run on pre-written codes, and a tele-op period, in which drivers control their team’s robot.

There are essentially two rounds at each competition: the qualification round and the alliance tournament round. The qualification round is a series of randomly generated games that, once finished, creates a ranking for all the teams at the competition. The alliance tournament begins once these rankings is determined. The top ranking teams pick two other teams to create their own alliances. The alliances then play in a single-elimination bracket, and the winning alliance wins the competition as a whole and may qualify for the next round of competition (e.g. winning certain regional competitions qualifies a team for States).

The challenge this year is called Relic Recovery, and it mainly involves stacking rows and columns of “glyphs” (foam cube game pieces) in order to get points. Other ways to get points include parking the robot, placing the plastic “relic” in certain “zones,” and balancing the robot on a surface.

Pingry’s team has had a fantastic showing at its tournaments so far. In its first tournament at Bayonne High School, Pingry placed fourth in qualifications and made it to the semifinals of the alliance tournament. Team Captain Alex Strasser (V) said it “was a great success” as an initial showing and that, afterwards, the “biggest things to fix [were] the autonomous, the glyph arm, the relic arm, and a lot more driving practice.”

While the team did not add a working relic arm for the next competition at Central Jersey College Prep, it did have a much more consistent autonomous code and overall driver control that launched the team into fourth place in qualifications once again and ultimately the finals of the alliance bracket. It narrowly lost two out of three games in the series, but the effort by and results from drivers Derek Huffman (IV) and Julian Lee (III) were still very impressive.

Pingry’s most recent competition was on December 10 at Livingston High School, and it was the first state qualifying tournament of the season. They were the second place alliance and came very close to qualifying. Their next tournament is on January 6th. Wish them luck!