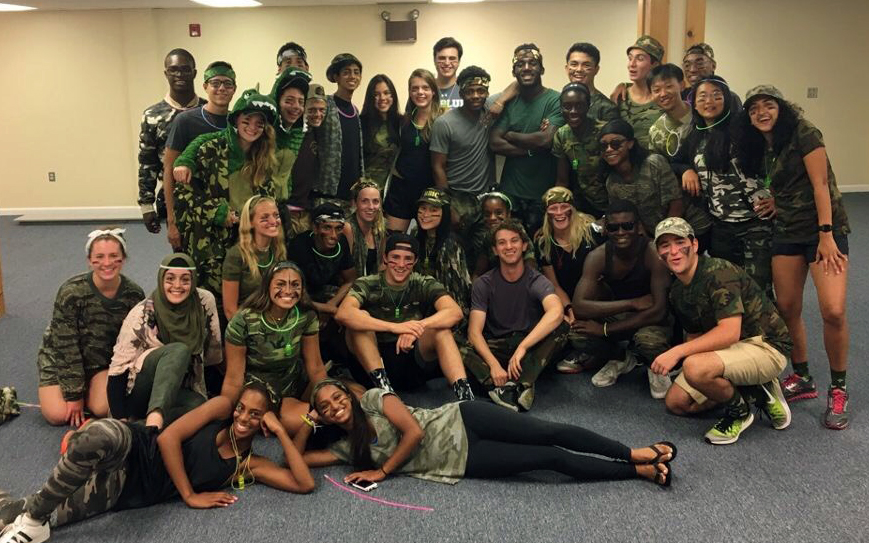 By Ouarida Benatia ’18 and Calvary Dominique ’18

From August 30 to August 31, the annual Freshman Retreat was held at the Bryn Mawr Mountain Retreat and Conference Center in Honesdale, Pennsylvania.

The peer leadership program, a part of the Pingry tradition for the past thirty three years, is designed to to make the middle  school to high school transition less daunting for freshmen. Transitioning from middle school into high school is one of the most challenging and exciting times in one’s life. Especially at a school like Pingry, where academic and personal excellence are stressed, there is a pressure to perform perfectly in and out the classroom. Freshmen also need to learn how to manage their newfound free time wisely so that they do not fall victim to procrastination. Without a strong support system, all the pressure can seem overwhelming.

Giancarlo Castillo (VI), a peer leader, remarks that “the most special thing about peer leadership is that the class helps [everyone] grow not only as leaders but also as people.” There are thirty-six peer leaders who are split into eighteen pairs; each pair mentors a group of about eight freshmen. This year’s advisors are Mrs. Ostrowsky, Mr. Ross, and Mr. Murdock, who run the discussions and activities for the class. After the peer leaders bonded during their own retreat in June, the freshman retreat was meant to establish a strong bond between seniors and freshmen.

Upon arrival at Bryn Mawr at the start of the retreat, each peer group made a flag symbolizing their group. The first activity was generally focused on getting the everyone into the habit of working together within their groups. The rest of the day was devoted to team-building activities including making a protective device for an egg drop, building a carriage that could withstand the weight of a person for a carriage race, making a catapult, and going through the “Gauntlet,” a timed obstacle course which could only be completed with the teamwork and contribution of every person in a peer group. After dinner, it was time for the dance. As soon as the DJ played the song “Who Let The Dogs Out” by Baha Men, the peer leaders rushed out to surprise the freshmen and began engaging everyone in the dance. The spirit was truly infectious, and a lot of the freshmen began to let go of their reservations and start having fun. The next day of the trip was game day. Anxiety filled the air as the peer groups launched their catapults, dropped their eggs, raced their carriages, and heard the results of the Gauntlet race. Alex Kaplan (III) said he liked “the building part because [everyone] put their heads together and sourced [the] idea for the chariot and made it all together, which was a good time.”

In sharp contrast from that exciting atmosphere, everyone boarded the buses for a relaxing trip back to Pingry. Kayley Taylor (III) says that peer group has definitely helped her transition to the high school and that “it’s better that we have one block where we don’t have to worry about anything and we can just talk to our peer leaders and actually get things done at the same time.” The freshman retreat was a clear success, and the prospective year in peer leadership is sure to be a success as well.